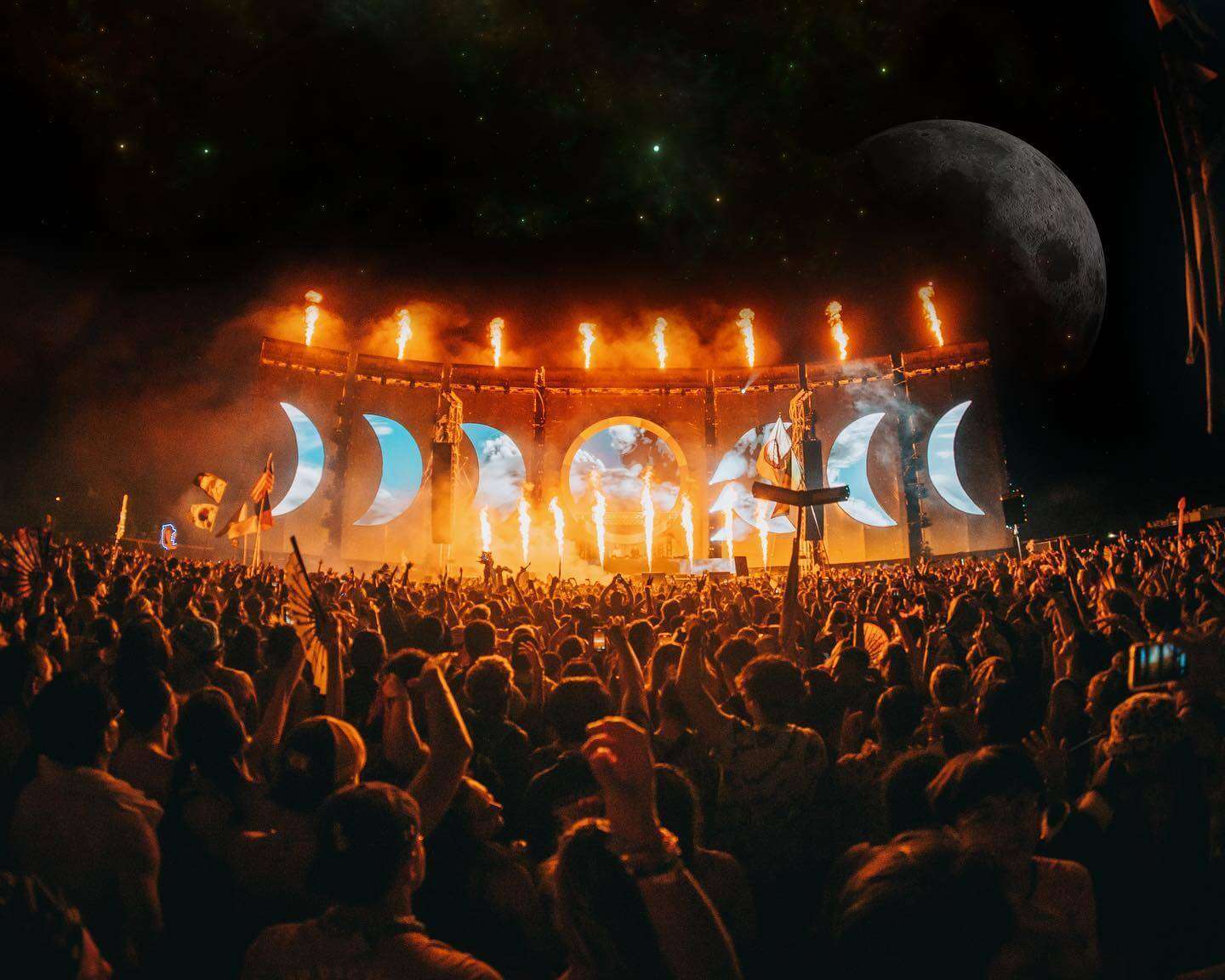 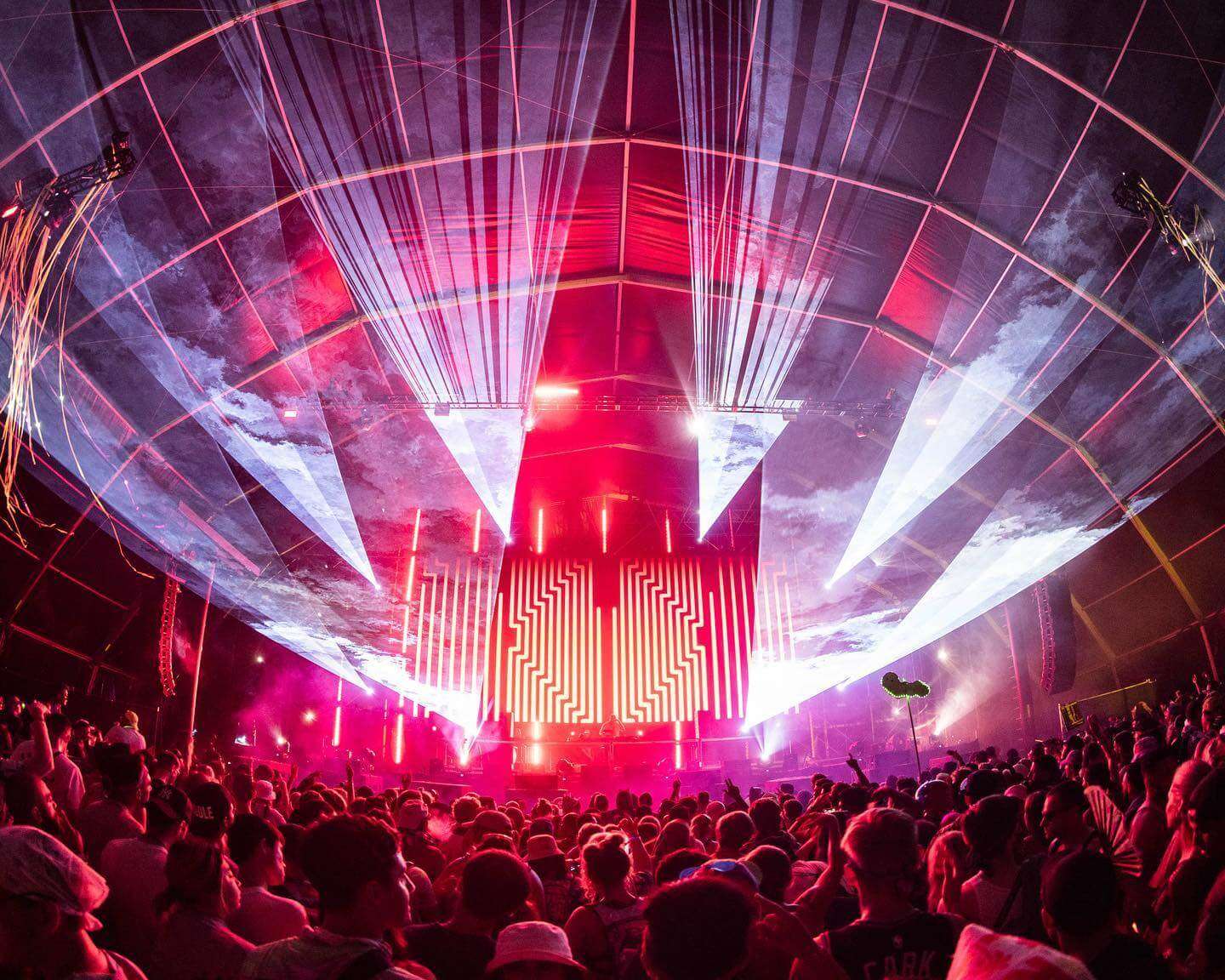 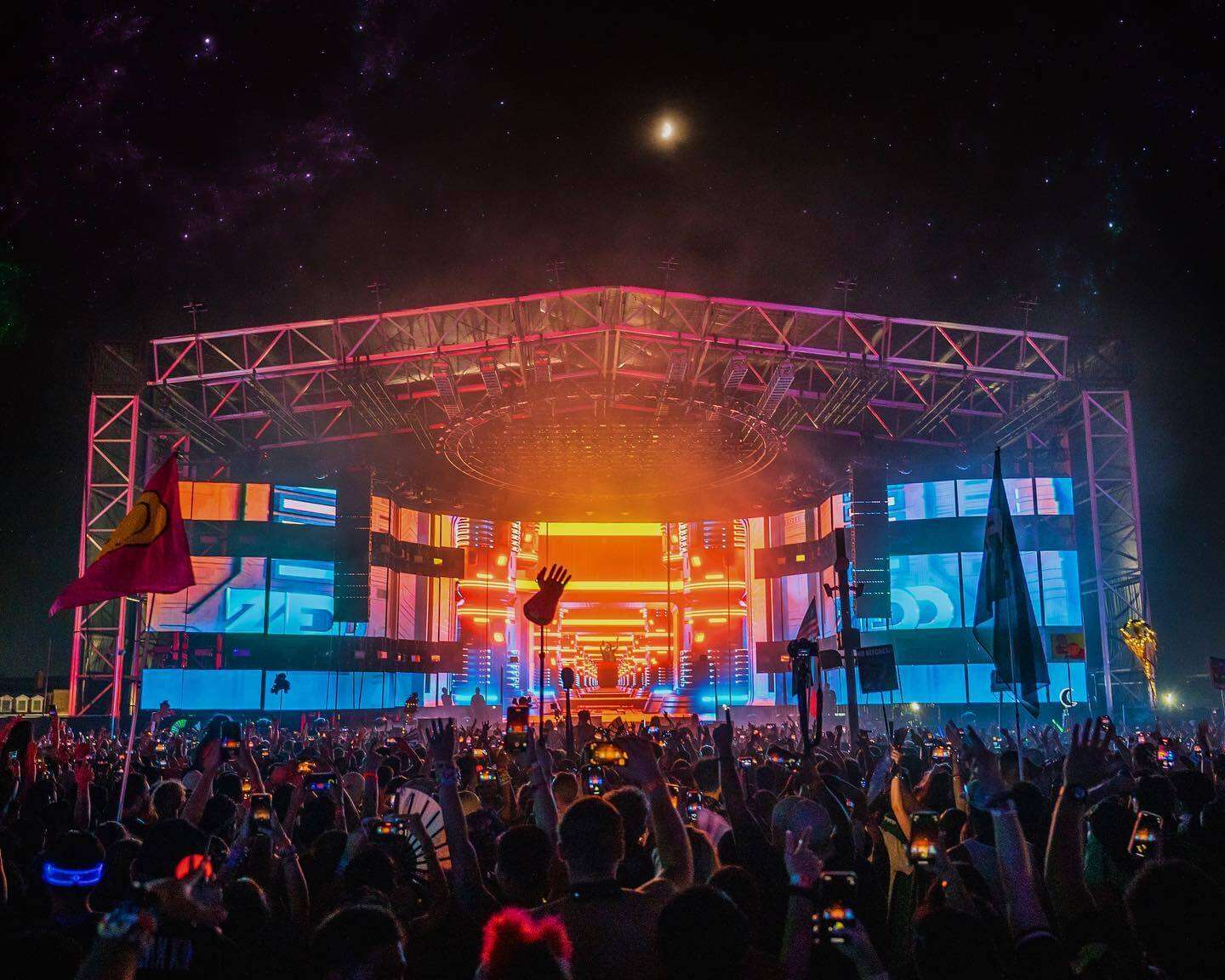 Walking into the festival with great expectations on the scorching weekend. People named the festival "Moon-Melt" because it was so hot. Checking into the festival was a breeze, and the security treated everyone kindly and respectfully. Moonrise took place in the middle of the raceway, all green grass. The transformation was already noticeable, with giant spaceman decorations all around. It felt like we were on another planet with dangling spacemen's art installations. Attendees were able to see the famous Space Man gravitating around the festival. The setup was easy to find drinks and food vendors as it circled the festival grounds, and along the left side of the festival were the medical and Ground Control tents plus the official Moonrise merch tent. In the middle of the festival was a shaded area with benches and hammocks at the giant vendor village. Attendees could explore the solar system to new realms with different art installations. The Space Room was filled with neon and glowing planets everywhere. The other side attraction is the euphoric relaxation room. There was seating on the floor with beanbag chairs with a projection screen up the top of trippy visuals.

Sprawling across three stages, the Lunar, Solar Tent, and the Steller Stage represented the Main Stage. Each spread spaciously with two VIP viewing areas at the Solar Tent and the Steller Stage. Insomniac Events and Club Glow surpass each stage and sound production. The Lunar stage was a massive widescreen with wild visuals and lasers. The Solar Tent should have been more ventilated since it was a sweltering weekend. Although the sound system made up for it, there were confetti blasts during every performance from each artist. It was easy to move around in the crowd. VIP had exclusive viewing areas, and it was easy to get to the front at both stages. The prices could have been fairer inside the festival, it was $18 for a tall boy beer and $5 for liquid death water, and the food was $15+ for a small dish. Plus, not all Drink vendors had every beverage available on the menu. There were rehydration filters, but it was difficult to refill a can. Every stage was loud to its fullest capability and did not overlap with other stages with sound control.

The 2022 massive lineup comprises the finest house music talent, heavyweight electronic DJs, and dubstep icons. The two-day festival began with up-and-coming talent from bass Queen magnet Steller, ALWZ SNNY, N3wport, and Jessica Audifred. The day graduated to the more extensive talent to close out each day. Every artist played with passion and expertise, bringing the crowd to uncontrollable movement during each set. ATLiens heated the crowd with their woobie and bassy performance. Peekaboo played a firey performance; everyone was headbanging to every beat and huge bass drop, setting the stage for Liquid Stranger. He made everyone look like a Squidward with his wiggly and saucy performance. Jason Ross, who has been in the scene for a long time, and I have been a fan of his music since his journey, played a euphoric set. A mix of old and new tunes, playing a full spectrum of his cataloged music. His deadly performance, Sullivan King, made the bass drop hard, left and right headbangers everywhere, breaking their necks and minds. Setting the bar high for the performance of Svdeen Death: Into The Inferno. His set was a complete bender of dubstep and hardcore bass. AC Slater started off playing dubstep, then switched gears by ending with a funky house set. Adventure Club played a joyful set they played primarily new music. It was the first time seeing Fisher perform, playing all his popular tracks like ‘Freaks,’ ‘Stop It,’ and looping Adam Beyer’s and Bart Skills’ ‘Your Mind’ into ‘Losing It’ for his finale closing track. I ended the night with house music legend Chris Lake. I’ve followed his music and career for ten years; he never fails in any performance. He played his top tracks such as 'Turn off the Lights’ and his newest track with Cloonee, 'Nightmare.' There were wild visuals throughout his matched every beat and transition set. It was a fantastic performance that made me and the rest of the crowd move with passion. Zedd closed out the Stellar Stage, and Rezz closed the Lunar Stage on the first night of Moonrise. 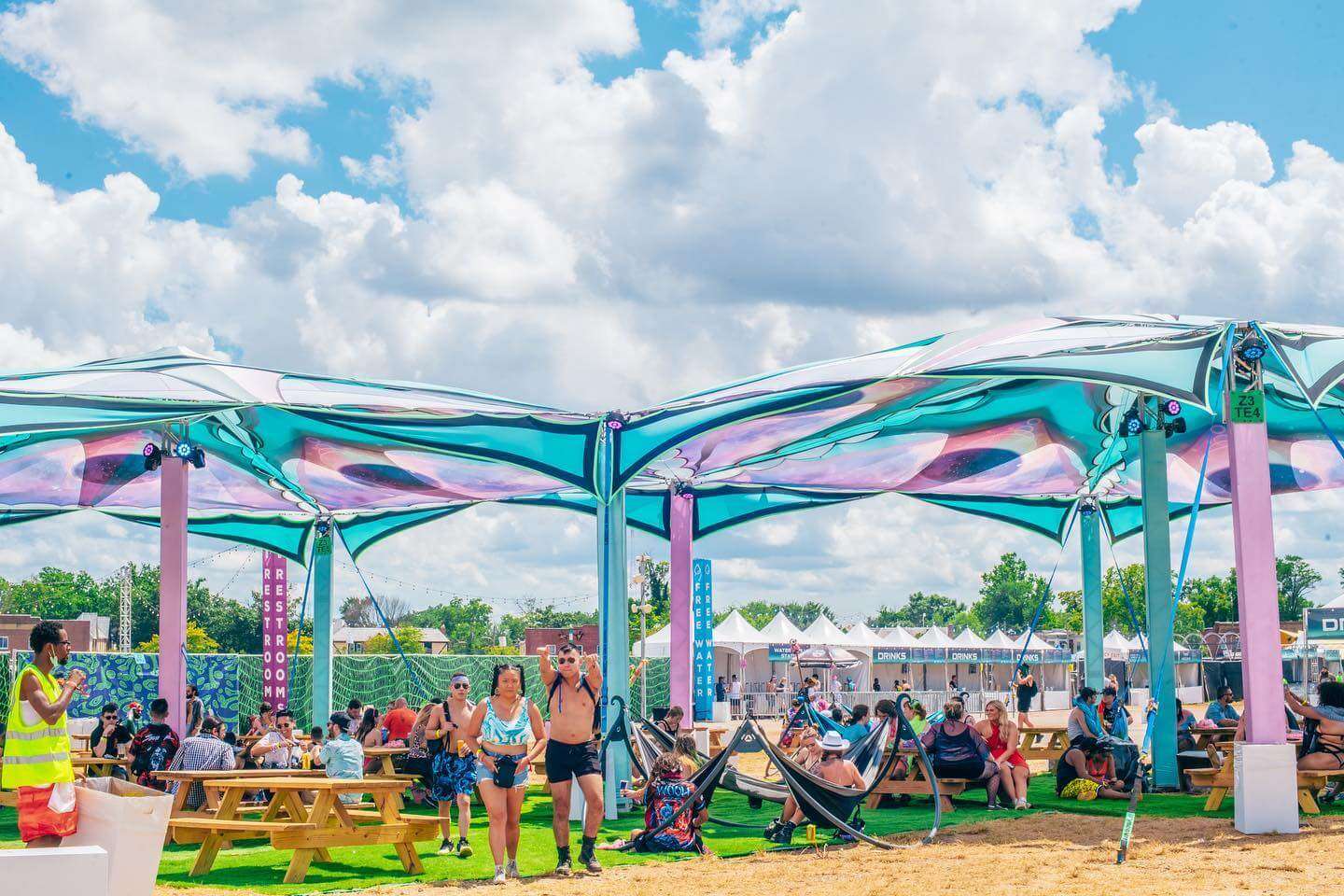 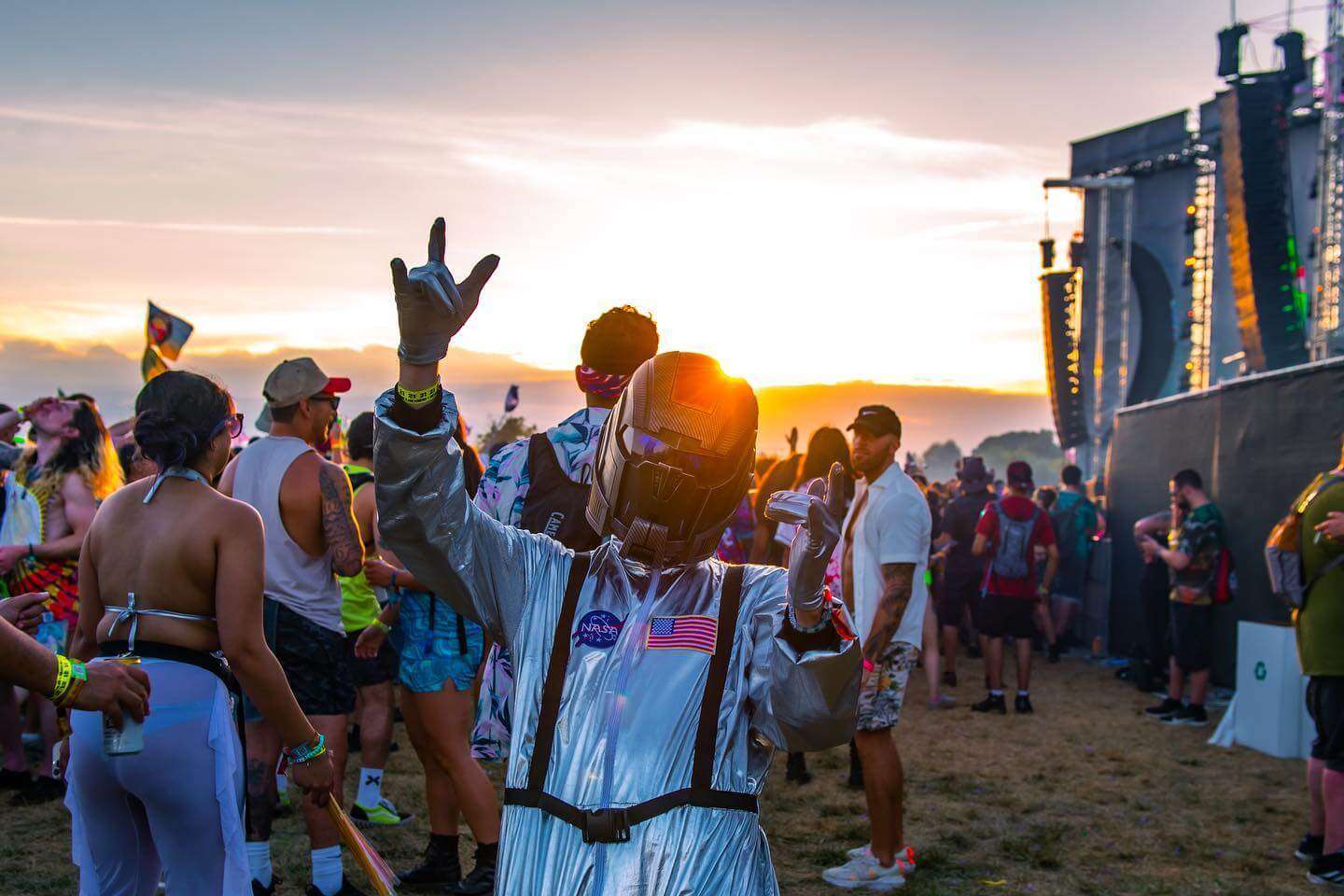 The Stellar Stage was entertained by Lost Kings, Don Diablo, and Audien. Plus, a magical sunset performance by Porter Robinson’s alias Air2Earth. A recently new side project expressing a new sound and different side of the talented producer. Air2Earth is a live-only performance dedicated to sample-driven progressive house music, tranquil, and air disco. The Lunar Stage was one of the most popular places on day two, with Kayzo, Level Up, Subtronics, and Zeds Dead. Excision was one of the most popular sets of the weekend, among the loud and vibrant energy throughout the crowd mixed with the wamps as he executed every bass drop with precision. The dubstep maestro performed a historical set with iconic visuals on the giant widescreen at the Lunar Stage for the finale. The Solar Tent had Boogie T B2B Dirty Monkey, Dom Dolla, and Wax Motif. Closing out the night was future house master, Tchami. Closing out the Stellar Stage was the legendary Tiësto.

Fueled with incredible vibes throughout the two-day festival. There were unique people from all walks of life, young crowd, and veterans from all east coast areas. The Moonrise crowd will be embedded in my mind forever; there were different wild sitings at each stage. The entire MoonCrew staff was incredible. We were upfront for a while, and Ground Control and security kept giving out water bottles. Paradocs Event Medical Services took over as the medical team for Moonrise. Paradocs is one of the finest festival and events medical companies in the States. The bartenders were extremely friendly at every drink vendor. Both days were different and fun in their ways.

Everything must end as the moon rose over the night sky each night. Exiting the festival was difficult to find the parking lot again. A giant circle walked out of the festival and back into the lot. However, signs guided each parking lot's color and section, although it was still hectic and unorganized. We were so happy once the car was found in the lot at the end. There was not much traffic leaving the festival. Closing out another successful festival with Insomniac Events and Club Glow. Moonrise Festival surpassed all expectations. It was completely different from before it was bought over. The festival brought incredible talent from all types of dance music that played supreme performances for the record books. The moon mission is complete.